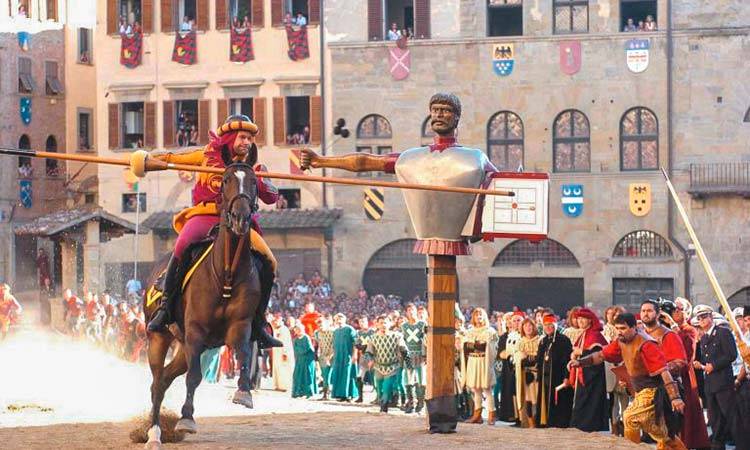 La Giostra del Saracino (Giostra del Saracino, Giostra ad burattum) is a medieval historical re-enactment that takes place in Arezzo twice a year, in a nocturnal version the penultimate Saturday in June, and in a diurnal version the first Sunday in September. The Giostra is a competition between the four districts of the city. Before the competition you can admire the historical procession that will parade through the streets of the city in medieval clothes. When the procession arrives in Piazza Grande, the various protagonists of the Giostra are called, the flag-wavers, the musicians, the districts, the vassals, the captains and the knights. At that point you will hear the spectators intone a song, Saracino’s hymn. Ended this moment, the square falls silent, and the game starts.

The knights, on their horses in the race, will have to hit with the lance a scoreboard held by a puppet representing the king of the Indies, the unfaithful sovereign that the Christian knights want to defeat. When the knights hits, this puppet called Buratto, starts to turn on himself trying to hit the knight. The score hit by the knight, is valid only if the knights proves to the jury that has not been hit. The judges check the board and write the result on a piece of paper that is read by the Araldo. Each district has two players, if at the end there is a tie, the play-off takes place. The winner wins the Golden Lance and will lead it in triumph first to the cathedral, and then in a party that will last until morning.