One day in Arezzo 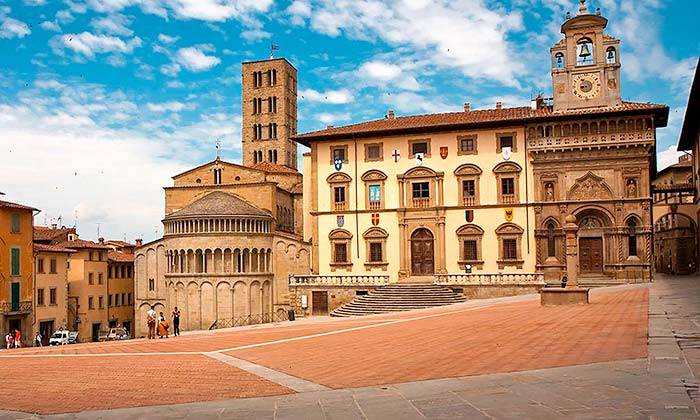 One day in Arezzo

The ancient and rich city of gold, is divided into two parts, the upper one, rich in monuments and historic buildings and the lower part that is modern, full of boutiques and youthful.

Access to the historic center of Arezzo is limited only to residents, so you have to park outside and reach the city center on foot. Very close there is the Pietri car park, spacious and cheap, its cost is 0.70 cents per hour. Not far away there is also the Tarlati car park, which is located in the homonymous street. You can also park at the train station.

1. The Cathedral of Arezzo is the symbol of the city, its tower can be admired from anywhere in the city. The building dates back to 1300, although its work was completed in the 1500s. Then some modifications have been made over time.

2. The Medici Fortress, is an example of medieval architecture of 1500. Built by the will of Cosimo I de 'Medici, the Fortress has a star shape and is surrounded by green. Its park in French style is very impressive. Inside there is a statue dedicated to Petrarca, the great poet, born in this beautiful city. Under the park there is the House of Petrarca, inside which there is a well dating back to the fifteenth century. Paying for a small ticket, you can visit this sacred temple of Italian literature.

3. Piazza Grande, is one of the main meeting places for the Aretines, seated for a break you can admire the beauty of Palazzo della Fraternità dei Laici, and the public fountain dating back to the sixteenth century.

4. La Pieve is a splendid example of Romanesque architecture. Its facades are adorned with columns, and its interior is rather austere, but deserves a visit.

5. The Roman Amphitheater, is what remains of a beautiful structure that has a capacity of 13,000 people. Behind this, there is the Archaeological Museum, where it is hoped ceramics and glass objects dating back to Etruscan and Roman times.

The third Saturday of June and the first Sunday of September in Arezzo is held the Giostra del Saracino, a splendid historical time reconstruction during which 8 knights representing the 4 districts of the city, who compete to win the Golden Lance. Every first Sunday of the month, and the previous Saturday, there is the Antiques Fair, the oldest and largest in Italy, which is held in Piazza Grande.