One day in Assisi 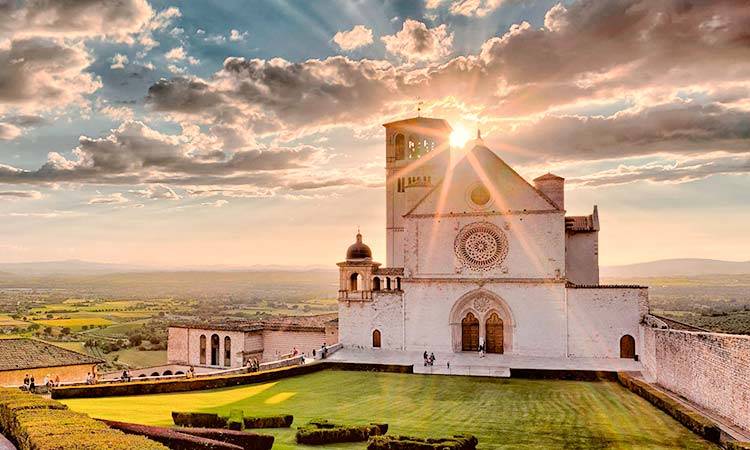 One day in Assisi

Assisi is an ancient and delightful city, nestled in the Umbrian hills. In this place, as well as admiring its beauty, you can wrap yourself in a spiritual atmosphere, left as a legacy by St. Francis, the patron of Italy, originally from Assisi.

1. The Basilica of San Francesco is definitely the highlight of Assisi. Dedicated to the most beloved Saint of Italy, its construction began in 1228 and was finished in two years. This stupendous architectural example is actually made up of two churches: the Upper and Lower Basilica, there is also a crypt with the Saint's tomb. The frescoes of this church are work of masters of Italian art such as Giotto, Cimabue, Lorenzetti and Simone Martini.

2. Piazza del Comune is the main square of Assisi as well as one of the most beautiful square in Italy. It has ancient origins, and was built in the place of the Roman Forum. From here you can admire Palazzo dei Priori and the Torre del popolo.

3. The Temple of Minerva, located in Piazza del Comune, dating back to the first century BC, has a perfectly preserved facade. Despite its name it is believed that the temple was dedicated to Hercules. This building has over time performed several functions, until it became a church in the Middle Ages. In 1634 it was re-adapted in Baroque style and dedicated to St. Philip Neri.

4. Palazzo Vallemani is the most beautiful of Assisi, and is always in Piazza del Comune. The Palace houses the Municipal Art Gallery, with beautiful frescoes dating back to both the medieval and the Renaissance times. These include some paintings by Perugino and the Majesty attributed to Giotto.

5. The Cathedral of San Rufino in Assisi, is the oldest church in the city. Even this church is actually an important place of Franciscan worship. In this church St. Francis and St. Clare were baptized. Its facade is considered by many the most beautiful example of Gothic style.

From the end of October to the beginning of November Assisi Unto has been held for 5 years, at the center of which is the Umbrian oil, but you will find spaces dedicated to other products of excellence typical of the area, such as truffles, legumes, wine and cold cuts. During this event the city offers exhibitions, concerts, shows, not to mention the delicious tastings. At the beginning of October there is the Festa delle salvie and the Florovivaismo exposition. In October Assisi is all in celebration, even the celebrations dedicated to St. Francis that is celebrated on October 4, are a magical, cultural and spiritual moment.