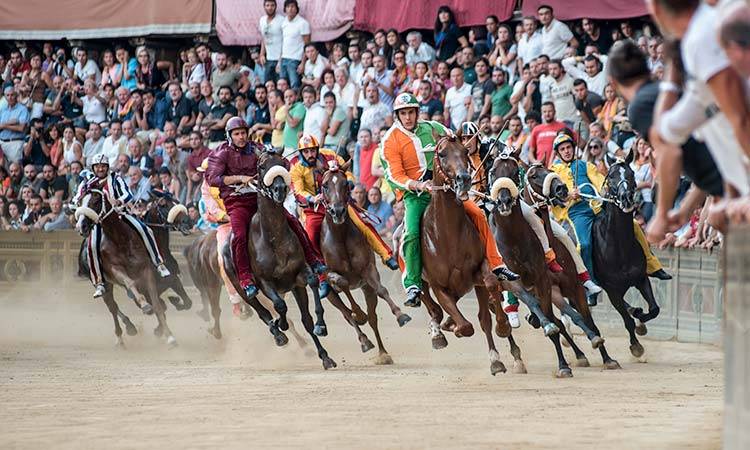 The Siena’ Palio has a very old tradition, the first horse race dates back to 1644. The race is held twice a year, one on the 2nd of July and one on the 16th of August. The event, however, occupies an important part of city life throughout the year, and is a tradition felt by most of the population. During each race ten of the 17 total districts compete. The districts are the neighborhoods of the cities with real statutes, roles, locations, museums and churches. Over time the districts have established relations of enmity and alliances.

The horses race consists of 3 laps of Piazza del Campo, for a total of 1000 meters, led by jockeys, each represented the districts. Who crosses the finish line first wins, even  if the horse is alone without a jockey (in this case the horse is called shaken). The Palio is a prize, a beautiful drape, designed each time by a different local artist. In the following days, winners will be waving this award around the city, aggregated in parade. The victorious Horse will be consecrated in the church as a hero and also carried around the city as a symbol of victory.

The race is held around 7 pm but is preceded by a historical parade. Most of the accesses to the square close an hour before the arrival of the parade,  at (16.45 in July, 15.45 in August). It is therefore advisable to wear a hat, as it will probably be very hot, and drink water. There will be bars and street vendors to buy a drink.

Attending the race is really exciting. During the extraction that establishes the order whose districts will leave (the moment when enmities and alliances  come out and the jockeys talk to each other), silence reigns in the square, and also while people are waiting for the departure. During the race the emotion rises to the stars, when the horses pass, the legs tremble. When the winner arrives at the finish line, nothing is understood any more, if the victorious quarter has an enemy district you can see the rivals running away from the square enraged, because they can not bear to see rivals rejoice. The winners instead exult around the square.

It is possible to see the Palio both from the standing square, from the stands or from the balconies, paying for rather expensive tickets. For those who could not attend the race, it is also nice to see Siena in the days before the palio, or in subsequent ones, because the square is set up a few days before and there are tests with lots of horses, fans, predictions, emotions and a very suggestive medieval air. In the following days the race, for the winners, will be a continuous party. Throughout the summer, however, all the districts have parties, dinners and parades.