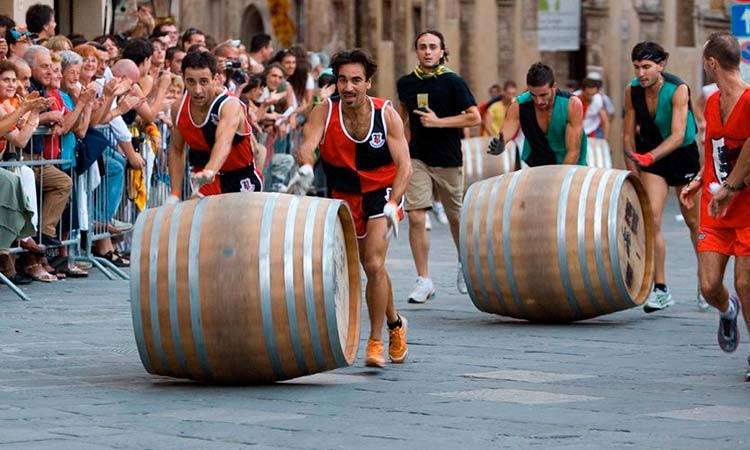 In Montepulciano, the last week of August there is a traditional festival. The Bravio is the competition of the 8 districts of the city. Each district has two athletes who compete in a race with the barrel. The route starts from the beginning of the city up to the main square of the city, Piazza Grande. Athletes along the way must push an empty barrel. Who arrives first wins the Bravio, a cloth painted every year by a different local artist.

In ancient times this race was done with the horses, however it was interrupted because the roads of the country are really narrow and steep, so for the horses a real massacre. The competition was taken up in the seventies by replacing the horses with the barrels, symbol of wine, the most important product of Montepulciano’s economy.

The race is held on the last Sunday of August, at 19.00, but is preceded by a beautiful parade in costume that starts at 15.00 and  takes the same route of the barrels. During the whole week before the race in Montepulciano is always party, each evening the districts prepare delicacies and organize dinners and parties. In particular, on the Thursday before the race, in the evening, at 9.00 pm, there is a parade just with the light of the candles, a historical procession that runs through the whole village. When the procession arrives in the square, there are also a dance show, flag-wavers and tambourines. At the end you will see suggestive fireworks that crackle around the magnificent municipal palace.